This is an issue I have seen a couple of times now, therefore I decided to write a blogpost about it. In january I got some issues with out test servers running Office365 and Shared Computer support that the credential tokens where not working and users needed to reauthenticate when opening another Office application.

Now I have also gotten a couple of questions on email and some on the Microsoft forum asking about the same.

Now I did a bit of troubleshooting and didn’t figure out what the issue was right away, but this feature had been working for quite some time therefore It must have been an update that was the issue and since Office365 is Click-to-run which is updated by Microsoft it must have been a new build that makes this happen.

Therefore I used the Group policy templates that comes with Office365 (Which can be downloaded here –> http://www.microsoft.com/en-us/download/details.aspx?id=35554) 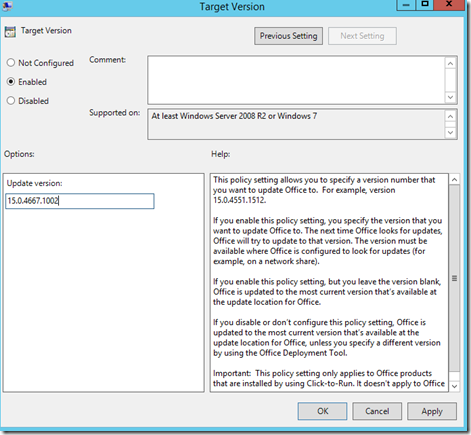 (Here are the version builds) http://support2.microsoft.com/gp/office-2013-365-update

And specified which build to use, then I choose the November build and Shared computer support worked as intended again. Therefore it seems like there is an bug/issue on the December and february build.