So alas, it is here!

This is something I have been working on for some time now, and my intention is that this is just the beginning  of something bigger.. (Hopefully)

For a couple of years now I have been writing for Packt Publishing and authored some books on NetScaler which has been a fun and a good learning experience. The problem with that is… These projects take alot of time! and the problem these days is that the releases are becoming more and more frequent and same goes for other underlying infrastructure which makes it cumbersome to have up-to date content available.

This is the first step in an attempt to create a full (free) NetScaler eBook, for the moment in time I decided to focus on Optimzing NetScaler traffic features. Hopefully other people will tag along as well, since there are so many bright minds in this community!

Also I would like to thank my reviewers which actually did the job of reading through it and giving me good feedback! (and of course correcting my grammar as well) a special thanks to Carl Stalhood (http://carlstalhood.com) https://twitter.com/cstalhood a Citrix CTP who contributed with alot of content to this eBook as well.

Also to my other reviewers as well!

How do I get it?
By signing up using your email in the contact form below, and ill send you an PDF copy after the book is finished editing sometime during the weekend, wanted to get this blogpost out before the weekend to see the interest.

The reason why I want to have an email address is that it makes it easier for me so send update after a new major version is available. Also I want some statistics to see how many are actually using it to see if I should continue on with this project or not. The email addresses I get will not be used to anything else, so no newsletters or selling info to the mafia…

Feedback and how to contribute?
Any feedback/corrections/suggestions please send them to my email address msandbu@gmail.com also if you want to contribute to this eBook please mail me! since I’m not an expert my all means, so any good ideas should be included so it can be shared with others.

With the slow demise of HTTP, there is a new kid on the block HTTP/2, Which I have blogged about earlier from a Netscaler point of view https://msandbu.wordpress.com/2015/07/03/citrix-netscaler-and-support-for-next-generation-web-traffic-protocols-like-spdy-http2/

In the upcoming server release from Microsoft, IIS 2016 will be the first IIS release that supports HTTP/2, it is enabled by default from TP3 (All we need is a certificate to enable HTTP/2) So if I fire up a HTTP connection to a IIS server 2016 it will use regular HTTP, this can be seen using developer tools on Internet Explorer

Now if I setup support for HTTP/2 for older versions, this needs to be enabled from registry at the moment, using the following registry key.

Then set the value to 1 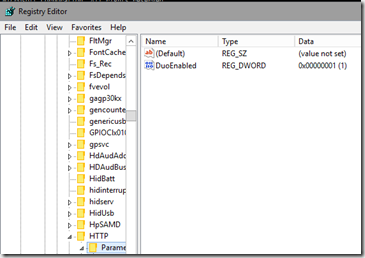 Then we need to add a certificate since HTTP/2 by default requires TLS in order to function, this can be done by for instance adding just a self-signed certificate to the web-site binding.
NOTE: This is not something that has be put as the standard, but just adopted by the different web-server vendors as well as browser vendors. 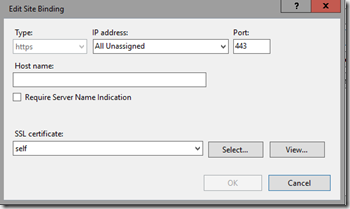 then restart the IIS service.

Just by moving to HTTP/2 looks like it has improved the performance very much. The login page went from 200 ms to about 40 – 50 ms load time. The general feel of the performance of the site looks much smoother.

NOTE: I have sent an email to Citrix to ask if this is supported or if there will be an upgrade in the future to support this properly.

NOTE: You can see more about the implementation of HTTP/2 on IIS on this GitHub page –> https://github.com/MSOpenTech/http2-katana

Now with the ever growing pace of internet traffic, we are being faced with one challenge, an old protocol which is over 15 years old now and is now way any shape to continue in this race, and yes the one I am talking about is the HTTP protocol.

Now over the years, Google has done a great job trying to improve this way of communication with its own protocol called SPDY which uses prioritizing and multiplexing and with transmission headers are sent using GZIP or Deflate. You can read more about SPDY here –> https://www.chromium.org/spdy/spdy-protocol/spdy-protocol-draft3

Now on the other hand you have the HTTP/2 protocol which the IEFT has worked one, which Google said will replace their own SPDY protocol (http://blog.chromium.org/2015/02/hello-http2-goodbye-spdy-http-is_9.html

You can read more about the RFC on HTTP/2 protocol here –> https://tools.ietf.org/html/rfc7540 but in essence its the same thing as SPDY, since the initial draft of HTTP/2 was based upon SPDY. Another thing that is important to note that communucation with HTTP2 is based upon a binary format since this is much easier to compress, while tradisional HTTP1.1 is upon human readable text. The people over at HTTP Watch did a comparision between tradisional HTTP, HTTP2 and SPDY https://blog.httpwatch.com/2015/01/16/a-simple-performance-comparison-of-https-spdy-and-http2/ and we can see that these new protocols works alot more efficient.

So what else is needed ? We need a web server that supports HTTP/2 or SPDY and we need web clients that support these protocols.

As we can see most web servers are already supported HTTP/2 https://en.wikipedia.org/wiki/HTTP/2#HTTP.2FHTTPS_servers Windows coming with in in Windows Server 2016 and the new version of IIS, and most web browsers support HTTP/2 as well, such as Chrome, Opera, Firefox, Internet Explorer and lastly Microsoft Edge

But for instance Firefox only supports HTTP/2 using TLS 1.2 https://wiki.mozilla.org/Networking/http2 meaning that even if the Netscaler can use HTTP2 over HTTP it will not work with most of the web browsers.

So how do I test that this stuff works ? the simplest thing is to download an addon to Chrome which is called HTTP/2 and SPDY indicator, which basically shows which sites are enabled for HTTP/2 and SPDY and so on.(This extension is available for FireFox as well)

We can also look at the interal table within Chrome by typing chrome://net-internals/#spdy in the address bar.

If this does not work on your chrome version you need to enable SPDY4/HTTP2 within Chrome which can be done using the chrome://flags/#enable-spdy4 flag.

In regards to setting this up on the Netscaler we have to create or alter a HTTP profile, and note this is only available from version 11 and upwards. 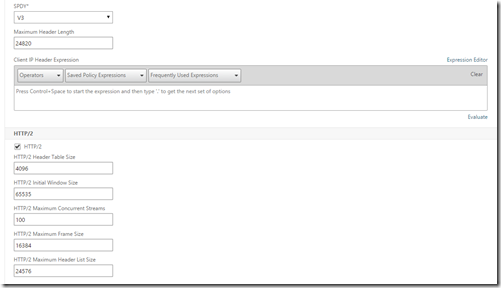 And choose enable under the checkbox for HTTP/2, if SPDY is also enabled the following preference is done when communicating with a vServer that has the HTTP profile bound

It is however important to note that running HTTP/2 on VPX is not supported and hence the clients will fall back to SPDY which is supported on a VPX.

However there are some requirements that are worth noticing on VPX for SPDY as well:

If SPDY sessions are not enabled even after performing the required steps, check the following conditions.