With the upcoming release, Microsoft has been busy with adding alot of new features to the RDS platform. Like RemoteFX vGPU for GEN2 and for Server OS + GPU Passtrough and Server VDI etc.. But out the blue came this https://blogs.msdn.microsoft.com/rds/2016/01/11/remote-desktop-protocol-rdp-10-avch-264-improvements-in-windows-10-and-windows-server-2016-technical-preview/

Also Rachel Berry at Nvidia also blogged about the limitations on H.264 and 4:2:0 –> https://virtuallyvisual.wordpress.com/2016/02/18/microsoft-rdp-end-client-h-264-444-hardware-decode-support-on-existing-decoders-420-elegant-and-cool/ anyhow I was curious just how does this affect my RDP performance?

The Setup was pretty simple, either I can use it with RemoteFX vGPU or a plain virtual machine running 2016 TP4. I also require a Windows 10 with build 1511 or higher.

There are basically two policies that we can define 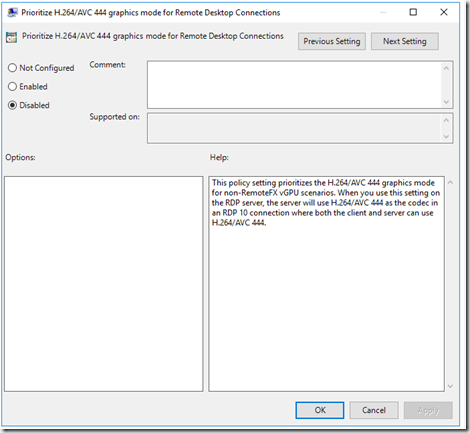 Now Prefer AVC hardware encoding, if you are using RemoteFX vGPU, the policy should be set on the Hyper-V host and not the RDS server itself.

After these settings are enabled and active, next time you try to connect to an RDP session you will see it triggers an event in the events log under RDS Applications and Services Logs -> Microsoft -> Windows -> RemoteDesktopServices-RdpCoreTS
Just need to reconnect after setting the policy

Now I did a couple of tests, which were pretty simple to see the bandwidth usage, (Also to test the differences between RDS 2012 and 2016) which were running the same setup in policies just one was enabled with AVC 444 and the other wasn’t

Now I ran the same test again and I got similar results for 2012 R2, but this time I was running with AVC 444 mode enabled, which my initial guess would state that it used a bit more bandwidth

I also did a couple of more tests, but the conclusion was almost the same. Use of AVC 444 in video uses about 10% more bandwidth. I will need to test more to see how much better the graphics actually are.