Earlier today Microsoft announced the long awaited feature which allows us to take backup of virtual machines directly in Azure. Now before today Microsoft didn’t have any solution to do backup of a VM unless doing a blob snapshot or some third party solution. You can read more about it here –> http://azure.microsoft.com/blog/2015/03/26/azure-backup-announcing-support-for-backup-of-azure-iaas-vms/

The IaaS backup feature is part of Azure Vault, and is pretty easy to setup. Important to note that enabling the backup feature requires that Azure installs an guest-agent in the VM (So therefore they require to be online during the registration process) and note that this is PR region.

So now that when we create a backup vault we get the new preview features. (Firstly we can also create storage replication policies)

Now in order to setup a backup rutine we first need to setup a policy, which define when to take backup. 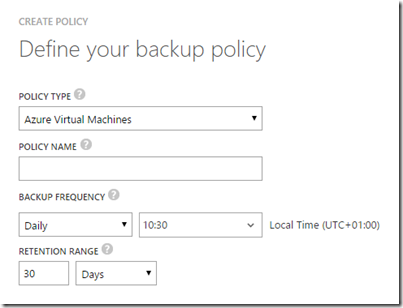 Next head on over to the dashboard, first the backup vault needs to detect which virtual machiens it can protect (so click Discover)

So it find the two virtual machines which are part of the same sub and in the same region.

NOTE: If one of your virtual machines are offline during the process the registration job fails (so don’t select VMs that are offline or just turn them on) Now after the item has been registrered to the vault I can see it under protected items in the backup vault 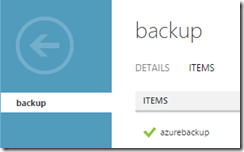 I can also click on the JOB and see what is happening.

So for this virtual machine which is a plain vanilla OS image took about 22 min, and doing a new backup 1 hour later took about the same amount of time, looks like there is not a incremental backup.